- October 11, 2018
If this were a movie, I would have magically turned my life around the moment I met my girlfriend.  Beautiful, free spirited, and so amazingly complex, she realizes my romantic ideal in almost every way possible.  I was so convinced that someone like her would have no interest in me that there's no way we'd be together today had she not made the first move.  I like to think that I'm the frog she chose to kiss. 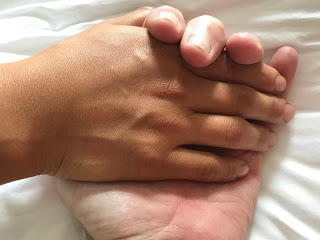 Even after we became a couple, I continued my unhealthy habits.  Then a few months into our relationship, after I completely exhausted myself walking with her through the city, she pointed out that if we were to continue on and start a family, I'd need to be in enough shape to properly care for our children.  I'd tried to lose weight at various points in the past, and it had never really taken.  But this was different.  This wasn't about losing a few pounds for vanity or health, which if I had really been taking seriously, I wouldn't have let myself get into such shape in the first place.  No, this was about a future I realized I wanted more than anything else in the world.

This was partly informed by my own childhood.  I came later on in my parents' lives and Dad, as a middle-aged and older blue collar worker who didn't have the healthiest of habits himself, would come home completely sapped.  I learned quickly as a child that asking him to play with me was not destined for anything other than disappointment.  It's telling that the rare occasions when he did have the time, energy, and interest to spend time hanging out with me are the most vivid memories I have as a kid.  Ensuring I would not be that kind of father was a powerful motivation.

My girlfriend often bristles when I give her credit for motivating me to lose weight, because in theory I should be doing this for myself.  But here's the problem: I didn't love myself enough to make the changes necessary.  I may still not.  But I do love her enough to want to make sure I was a healthy, viable partner.  And I love our hypothetical kids enough to be the kind of dad they hypothetically deserve.

That's something that a lot of people don't realize about motivation.  We each have our own strings that pull us in positive or negative directions.  Sure, there are broad patterns that one can discern and utilize for large populations, as Dan Pink has reminded us.  But for individuals, what works for one person is not necessarily going to work for the next.  Some of us are motivated by material things or vanity or pleasing others.  Some of us are motivated by feelings of accomplishment or practical benefits or avoiding disappointing others.

I have a friend who has a perhaps overdeveloped sense of duty to others.  As a result, she rarely prioritizes doing something for herself, whether it's giving herself a treat, pampering herself, or even just looking out for her own health and well-being.  But if someone is depending on her actions, especially her family, she lets very little get in the way between her and success.  Some of us are just wired that way.  I think it's fair to say I am.

That's why it's so important for someone to develop a true understanding of what gets them moving on something they know needs to be done.  Choosing the right carrot or stick can mean the difference between success and failure when it comes to self-motivation.  Choose wisely and you have the drive to conquer all obstacles.  Choose poorly and the couch and remote control starts to take over as a goal.  When faced with good and bad choices, it's just easier for me to pick the right choices when I keep what truly motivates me in mind.

Not to say it's always easy, and this is where maintaining a support structure to reinforce that motivation is priceless.  When I have fallen off the wagon, my girlfriend has been very effective at letting me know I need to get back on the right course.  And without fail I do.  She's a great motivator as well as a great motivation.

So I was on board with the weight loss concept.  Starting it was intimidating, though.  That's where my great motivator came in again, outlining a set of steps that I knew would let me make real progress on a continuing basis.  There's nothing like having a plan to get one into a comfort zone with something new.  I'll talk about that plan in the next post.