Keeping the Treats Under Control 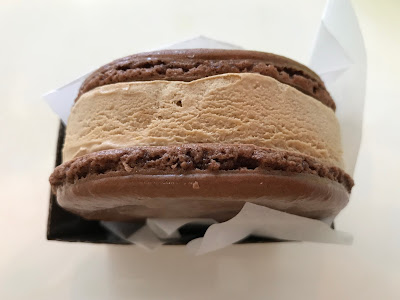 So I'd decided to make a lifestyle change, not a temporary diet.  And part of that lifestyle change was to eliminate most carbs.  That was easier said than done.  I mean, if you were to ask me to list off the foods I love, it would be filled with things like pizza, pasta, mashed potatoes, and burgers with fries.  Desserts and sweets?  Yes please.  And on top of all that, I work in a profession where we have a lot of catered meetings filled with sandwiches and cookies.  I could try to tell myself that I was just never going to have those things again, but that would be an existence of misery.

I was going to have to figure out a way to still let myself enjoy an occasional exception without letting things get out of hand.

I don't believe in cheat days for a couple of reasons.  I've seen people cheat on their diets, and it usually gets out of hand quickly.   There needs to be structure, because it's too easy to just declare any day a cheat day.  And declaring a specific day of the week a cheat day is not conducive to keeping momentum going, because weight loss doesn't work on a set schedule and it doesn't seem logical to force oneself to cheat to keep a set schedule.

However, the biggest reason I don't like cheating is that, like I said, this was not a diet, it was a permanent change in behavior.  Cheating as a concept undermines that whole "permanent" aspect, just as cheating in a marriage undermines the vows taken when entering it.  I was not interested in cheating on my regimen.  Now, having an open relationship with it that featured set rules?  That was something I could do.

It struck me that trying to keep from falling off the wagon with my eating regimen would require discipline similar to when, as a young adult, I had to find the discipline to get my finances in order and recover from the traditional college student practice of racking up credit card debt.  I had to come up with rules of living that kept my spending habits disciplined without making me feel like I was depriving myself.  Following that theme, I developed several strategies for allowing myself a periodic reward.  I've found that no one strategy is perfect, so rotating among them has been most effective for me.

The first strategy I adopted was one of stopping myself each time I had the opportunity for a treat and ask myself whether taking on the calories inherent in the treat was worth the work it would take to burn those calories off.  How meaningful were those calories to me?  So a cookie at a meeting was not worth it, but a slice of a friend's birthday cake was.  This was based on a strategy I adopted to help quell impulse purchases.

It proved highly effective for the first several months of my weight loss, but it was not perfect.  As I'll write about in the near future, one of the problems that many fat people have in maintaining a consistent dietary regimen is that our brain chemistry has adapted to poor diets to the point where our reward functions react strongly to unhealthy foods. That makes decision-making relatively easy when things are going well, but as with any addict, stressful times can degrade decision-making quickly.  When things started getting highly stressful at work, I found myself justifying treats far more frequently.

When that strategy started running into issues, I switched to only taking on treats when I'd put in the work to burn them off by getting my exercise in.  This matched up with my spending strategy of only buying things I have budgeted for.  A treat could be a reward for a great session in the gym, for example.  This was a great way to switch things up and encourage more exercise, which I admit is the half of losing weight that I struggle with more.  However, there are two issues with this strategy.

First, it becomes way too easy to talk yourself into taking calories out on credit.  "I had a great day at the gym -- I deserve a treat" can all too quickly become "I want a treat -- I'll make up for it by having a great day at the gym tomorrow".  Do that with your financial budget, and you'll quickly find yourself in debt.  Do that with your calorie budget and you'll quickly find your weight going in the wrong direction.

But even when you don't start going into calorie debt, this strategy can be problematic long term.  As I've said before, losing weight is simple math: burn more calories than you take in and in the long run you'll lose weight.  If burning calories becomes an excuse to take in more calories in the form of a treat, you end up slowing your progress.  I had a bit of a plateau as a result.

I broke out of that plateau adopting a strategy based on only buying what I've saved for.  I would set a weight loss goal for myself and only treat myself when that milestone had been reached.  This created reward days instead of cheat days.  When confronted with an opportunity for a treat, the question "Have I earned this yet?" is very easy to answer.

It's been very effective, and I've had two reward days as a result of losing 20 pounds, including the pounds that put me over the 200 pounds lost mark.  However, even this isn't perfect.  The holidays are coming up, and while they present opportunities for over-indulgence that need to be combatted, there's also a minimum level of participation expected in these events.  It's difficult to visit family and explain that you can't partake in the Thanksgiving dinner that they slaved over because there's little of it that fits your regimen.  It's hard to say no to your best friend's birthday cake.  There has to be a middle ground.

While I've talked about these strategies individually, a hybrid approach combining all three seems the most promising.  Use the reward day concept as the default, but allow for exceptions when an important occasion demands it.  However, don't soften the criteria for what a meaningful exception is.  And earn that exception with some hard work at the gym.
diet food lifestyle strategies treats weight loss