The Tyranny of the Unempty Plate 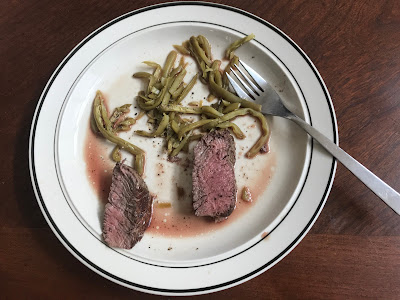 It's a common story, I'm afraid.  As a kid, I'd decide I was finished eating and want to leave the table.  But there was still food on my plate, and that seemed like the worst crime next to murder to my mom.  "You stay here and clean your plate.  There are kids starving in India!"  It was never clear how me eating all the food on my plate could possibly help a starving child half a world away, but mom was deadly serious about it.  Every single time.

Sometimes the plate would still have food on it because it included some item (usually a vegetable) I wasn't crazy about.  Sometimes it was because I went for seconds and overdid it.  Sometimes I just couldn't deal with having leftovers of the same meal for the third or fourth straight night.  Sometimes I just wasn't that hungry.  It didn't really matter the reason, the response from mom was always predictable; "There are children starving in Africa!"  (Those starving kids got around.)

Do something often enough and it becomes habit, and so it was with cleaning my plate.  What started out as directives from my mother became something I proactively did to avoid learning about the latest stop on the Starving Kids Tour 1980, and that gave way to just doing it without even thinking.  Put a plate of food in front of me, and by the end of the meal, it would all be gone.  Even if I felt stuffed afterward.  Even if I felt beyond stuffed afterward.

But here's the thing about overeating.  You do it often enough and it changes you.  Not only does it become a behavioral tic, it actually changes you physiologically.  Feelings of fullness are the result of signals from the vagus nerve that connects your gut to your brain.  Neurons that react to physical deformation of structures in your body called mechanoreceptors detect changes in your stomach geometry from the insertion of more food, and eventually cause signals to the vagus nerve that indicate you're full.  However, when you habitually overeat, this can change.

When you take on a high fat diet and overeat, the function of this system can become inhibited, resulting in you no longer feeling full after eating the same amount of food.  Scientists working with mice that had been put on such a high-fat diet found that even returning them to a low-fat diet after reaching this inhibited state still didn't result in the return of the feeling of fullness. The functioning of the system was fundamentally altered.

This has happened to me.  I no longer easily feel full.  Actually, I no longer easily feel stuffed.  Put a bag of chips in front of me and over time, all of those chips will be eaten.  Unless I'm conscious about it and purposefully stop myself, I'll slowly just keep working my way through the entire bag.  Instead of using feelings of fullness to know when to stop eating, I have to reason about what's an appropriate amount of food to ingest, and things like chips create an insidious case.  It's easy enough to rationally decide eating a second steak is not a good idea, but what's one more chip?  Couple this with the learned drive to finish eating food in front of me, and it's nearly impossible to stop.  As a result, I try to stay away from foods like that when I can (though I've not eaten a potato chip in months, I do seem to find myself confronted by tortilla chips periodically).

My request to parents out there is to avoid teaching your children that they must eat everything on their plate at every meal.  Instead, teach them about portion control.  Have them learn it's okay to save some of their big restaurant meal for another day.  It should be more about your children's health than on how much the uneaten food cost.