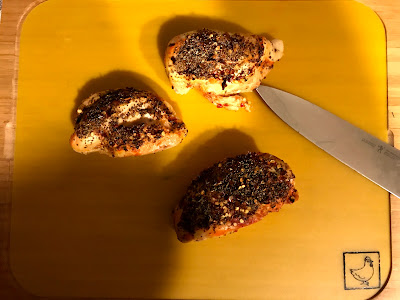 When I started having salads almost every day, I realized quickly that to keep momentum going, the salads I fixed at home had to raise their game and match the taste and variety of the salads I could get at places like Chopt.  I started buying chicken from my local grocer's deli department and using that in salads, but that was not terribly economical.  Instead, I decided to make my own chicken for salads and began experimenting with different spice rubs and recipes.  I hit upon a recipe that not only did I like to eat, it turned out to be one of my girlfriend's favorite foods: one day when we were starting out on a road trip, I asked her if we should stop somewhere and get supplies for the journey, and all she wanted was to fill a bag with my latest batch of chicken and eat that on the road. 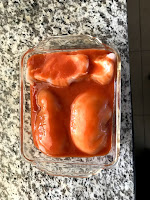 A day or two before roasting the chicken, marinate it in hot sauce.  I prefer to use Frank's Red Hot.  It is 0 calories and provides a simple combination of cayenne peppers, distilled vinegar, water, salt, and garlic powder.  I normally just use two breasts per batch, but this particular day I was using breasts that were on the smaller side, so I used three.  I suggest using fresh chicken, as I've found it tends to stay moist after cooking more readily than chicken that's been frozen and thawed. 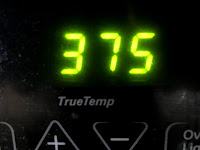 First, preheat the oven to 375 degrees (Fahrenheit).  There's nothing magical about this temperature.  I've found it to be ideal for doing slow roasting for an extended time (I keep the chicken in the oven for 55 minutes) without drying out the meat. 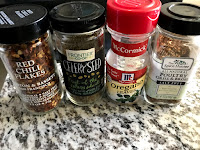 You'll want to develop your own mix of spices to coat your chicken.  I use a mix of red chili flakes, general poultry seasoning mix, oregano, and celery seed.  These bottles usually last me a few months before they need to be replaced.  Other options to consider include a jerk mix, cayenne (which I've used as a replacement for the red chili flakes), black pepper, and paprika.  I've thought about trying dill in the mix as well.  Fit your mix to your taste. 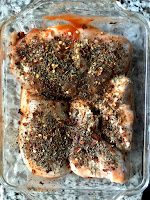 Remove the chicken from the pan and pour out the hot sauce marinade.  It's okay for there to be a thin film of marinade coating the pan, as that will largely get absorbed by the chicken during the roasting. You just want to avoid having so much liquid in the pan to boil the chicken instead of baking it.

Coat both sides of each breast with liberal amounts of your spice mix.  I tend to apply my spices one at a time, starting with the red chili flakes and ending with the celery seed.  You may want to pre-mix all your spices to the proportions you like and apply all at once.  You do you. 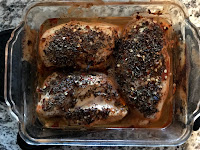 Bake for 55 minutes (you may want to adjust for your oven and environment).  Once out of the oven, let rest for at least an hour to let as much of the juices as possible to reabsorb before you cut.  I usually give it two hours, cutting the chicken while still warm but approaching room temperature. 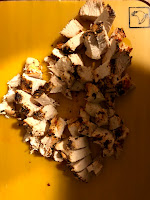 Dice the chicken with a good sharp knife.  You may instead want to shred your chicken instead, though that could result in an uneven distribution of spices across different chunks.  I tend to go for the uniformity of the cube.  Pack in a storage container or ziplock bag and keep in your fridge up to a week.

I use this chicken in salads, with ramen, in omelets (there's something perversely satisfying about combining chicken and eggs), and sometimes in a bowl of cream of chicken soup.  I also sometimes come home and grab a cube or two of it to snack on while cooking my dinner.
chicken food lifestyle recipe